This took about a year of off and on work.

The entire thing is completed on a 29x35 piece of 20 count fabric (at least, I'm fairly certain it's 20 count). I don't have exact dimensions of the stitch count itself, mainly because there's obviously spaces between everything and when putting them onto the fabric, it was eyeballed (as you can see by the letter L in the final project, I put that one just a little bit too high. I'm okay with it though.) This thing is big, but at the very least comprised of 26 small images that can be looked at as mini projects. The letters do get a bit more elaborate as you go along, some being a bit more involved than others including back stitch.

Now, I am no pattern maker, and since this was designed in part by me and one other person, there are some fundamental mistakes made in snap decisions to change colours that the program picked for me and completely forgetting to write those down, or using unmarked thread from my stash. I've included the suggested colours that the program has given, but I highly suggest double checking the blend and shade when you get to it. A couple of symbols have been combined into one colour (840), so the symbol "j" and ">>" are the same (these are for the skull on E).

Obviously, this is a free pattern that is able to be changed, redone, shifted to how you want it, so go for it. If you feel inclined to give a couple dollars or whatever, just let me know in a PM, I do have a way you can donate. This is in no way required, of course.

I suggest you tackle this piece with going through and doing all the black first, that's what I did. It takes forever, but then you can adjust where everything goes as you stitch, and it's easier to unpick a chunk of black than it is to unpick the whole thing. Obviously, plan your route and count. I can't stress the importance of double checking your count, that way you don't run out of fabric on the sides. Leave enough room for your framing, of course. Better to have too much fabric left than too little.

Black and yellow were the most colours used in this. Many of the pieces use different shades of yellow, it's recommended to pick 5 shades of yellow that blend well and stick with those. My final piece ended up with different yellows, so again, use the colour palette as a guideline rather than a hard rule.

Here is an explanation of quotes used; the entire sampler is based off of Ocarina of Time. Some of the images were ripped from the game, some of them were custom, and others were from various sources and edited.

A: Windmill man and his wonderful obsession with going around!
B: Darunia swearing to be your brother.
C: Deku Tree telling you to prepare to enter the first dungeon.
D: A Navi quote at a part of the game when you are directed to Death Mountain. On a side note, I ripped the sprite directly from the game for this one, so what you see from Hyrule Field is what this sprite is.
E: A Kokiri quote when she ominously states that anyone who goes into the Lost Woods turns into a Stalfos
F: Sheik talks about friendship many times
G: Zelda talking about Ganondorf after you beat him the first time
H: Rauru telling you to awaken
I: Kotake complaining about her early demise
J: Ruto wondering about Jabu-Jabu
K: The guard at the gate to Death Mountain wants this mask
L: Navi HAD to be here somewhere!
M: Navi exclaiming about the Master Sword when you first encounter it (this one has kind of a 'don't dead open inside' issue with it. I played around with a bunch of layouts, but ended up on this one)
N: The signpost in front of the well has this on it in Kakariko Village
O: Malon says this before you learn Epona's Song.
P: Dampe's Tour to get a heart piece
Q: The Deku Scrub laments giving you the key to get into Gohma's Lair in the Deku Tree
R: Zelda's Lullaby at the end of the game when you are sent back in time
S: The start of every Gossip Stone saying
T: Ganondorf says this at the start of the first phase/final battle
U: I couldn't resist slipping in the Lakeside Scientist's line when he's so excited to get the frog.
V: Deku Tree talking about Link's nightmares
W: Darunia dancing to Saria's Song
X: Final blow to Ganon at the end of the game, Zelda saying to the other sages to seal him in. X is kind of hard to find a word that starts with it, so I had to be a little creative.
Y: The owl, Kaepora Gaebora, who always gets newbies with his text boxes. The feathers are actually from Banjo-Kazooie!
Z: And the first exciting moment when you realize you get to meet a princess.
Overall, I had a lot of fun with this pattern, despite the whining to myself about so much black and large chunks of yellow, I got through it. I'm very proud of the end result and hope that anyone else who is interested in Zelda will have fun with it! 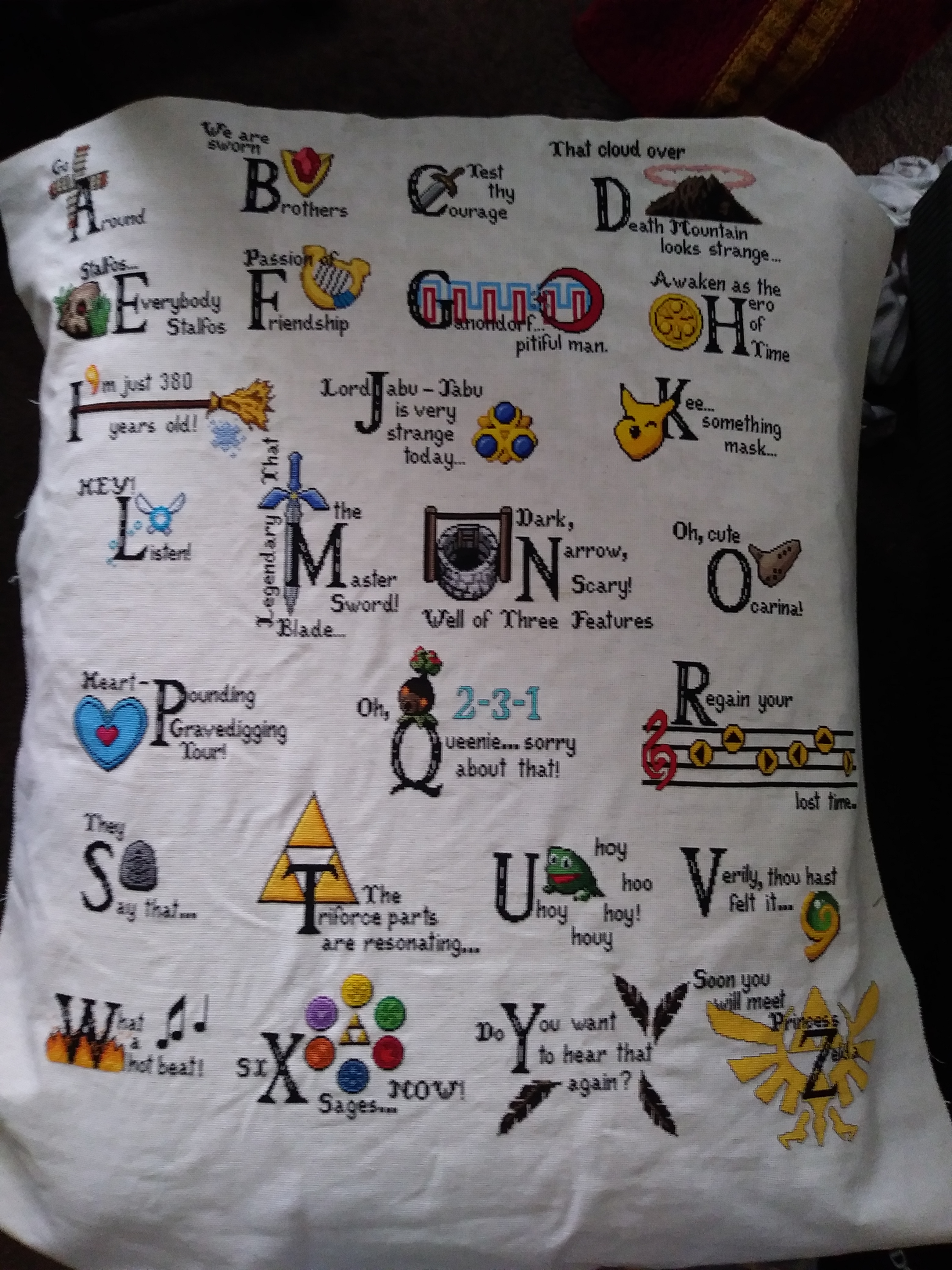 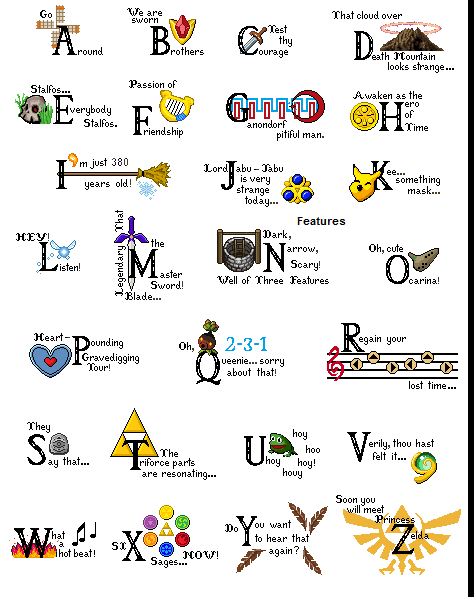 OMG! How lovely!
Thank you so much for posting this - it looks like it took a lot of work to get it from idea to a stitched piece. And thank you for being so clear in your advice on how to stitch it!
I think I may have to tackle it at some point (after I get through my current jobs, ofc) but I hope people do try this one!

(PS. you wouldn't happen to have the original pattern file available, would you?)

RMDC wrote:...I've been stitching at an estimated rate of almost a full BMH per day...

blackmageheart wrote:OMG! How lovely!
Thank you so much for posting this - it looks like it took a lot of work to get it from idea to a stitched piece. And thank you for being so clear in your advice on how to stitch it!
I think I may have to tackle it at some point (after I get through my current jobs, ofc) but I hope people do try this one!

(PS. you wouldn't happen to have the original pattern file available, would you?)

Glad you like it, OOT is my childhood game so it was really a joy to put together.

I don't have the original file available, alas, it was done on a different computer and I had merely snipped screenshots of them as I went as I couldn't save them, sorry.

I did my best to make them clear, though, so hopefully it's not too much of a hassle for people.
Top

This looks seriously fun!! Ah man, its so hard to balance stitching stuff with playing video games, I want to do both at the same time!
Top

Beautiful work!!!
"May we maintain the courage to defy the consensus. May we ever choose the harder right instead of the easier wrong." - President Thomas S. Monson
Top

MartinG wrote:I don't have the original file available, alas, it was done on a different computer and I had merely snipped screenshots of them as I went as I couldn't save them, sorry.

I did my best to make them clear, though, so hopefully it's not too much of a hassle for people.

No problem! I'm just one of those annoying people who prefers pattern files over PDFs - mostly so I can see 'em better!

RMDC wrote:...I've been stitching at an estimated rate of almost a full BMH per day...

This is absolutely beautiful. Impressive work! Thank you for being willing to share the pattern.
I'm gettin' bloggy: http://craftscapades.com/
Top

You (and your friend) did a great job on this.

I've only played a little of the first NES Zelda game, so I don't know most of the references

and I am still a bit tempted to stitch this pattern.
Best quality photos here, but,for more frequent updates, check out my instagram
https://www.instagram.com/moiraestitches/
Top
Post Reply
8 posts • Page 1 of 1